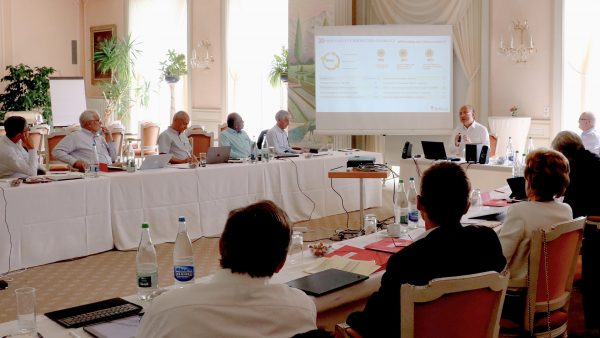 Last week, Southern University of Science and Technology (SUSTech) President Chen Shiyi was invited to the 12th Glion Colloquium in Montreux, Switzerland to discuss the role that the world’s leading universities should play in addressing the great challenges and opportunities of our times. Leaders from universities in Australia, Canada, the United Kingdom, the Netherlands, Germany, the Czech Republic, Switzerland, the United States, Singapore, Japan, South Korea and India were all in attendance with President Chen Shiyi.

Founded in 1998 and held every two years, the Glion Colloqium is a think-tank on higher education for the leaders of research universities. The theme for the year’s Glion Colloqium operated was “The contrasting responses of Higher Education worldwide in promoting sustainable development.”

Following the tradition since its inception, the forum was informed by participants from a practitioner point of view rather than a scholarly point of view. The forum articles were submitted before the meeting and discussed for three days during the forum. The results of the discussion were incorporated into the revision of the articles, compiled in a centralized volume and shared with the public through the network.

Over the past 20 years, 250 university, business and government leaders have participated in the forum and participated in discussions on major issues such as the research universities for an ear of change, university governance, university-society relations, industry-university relations, and globalization of higher education. It has an inestimable impact on sharing experiences and forming common understanding among leaders of higher education in the world.

President Chen Shiyi spoke on the topic of “The Role of a Rising University in an Emerging International Metropolis.” Using the case study of education innovation at SUSTech and the University’s support for Shenzhen’s strategic and sustainable development, President Chen Shiyi analyzed the formation of partnerships between new Chinese universities and their sponsoring cities. He also discussed the important role of internationalization in developing modern Chinese university systems. His speech called on the international higher education system to continue to maintain its tradition of open exchanges in making contributions to global sustainable development.

The university leaders attending the Colloquium provided various perspectives when discussing several important issues. One such issues was how the societal mission of modern universities has evolved and shall develop in a social-economic context restructured by emerging science and technology in a rapidly shifting geopolitical climate. They also talked about what innovative education, research and service initiatives their universities have launched or may establish to support sustainable development and the future-oriented changes. The global impact of China and the rise of Chinese universities were frequently mentioned topics at the Colloquium. President Chen’s participation in the discussion enriched the understanding of the global university leaders about the development of research universities in China.

Southern University of Science and Technology (SUSTech) and the Swiss Federal Institute of Technology Zürich (ETH Zürich) have this week signed a memorandum of cooperation (MoC) for the construction of Institute of Risk Analysis, Forecasting and Management (Institute).

The agreement was signed by SUSTech President Chen Shiyi and ETH Zürich President Joël Mesot. The signing took place on the sidelines of the 12th Glion Colloquium in Montreux, Switzerland, which is a think-tank on higher education for the leaders of research universities. Every two years the Glion Colloquium hosts a forum for research university leaders to consider together the role that the world’s leading universities should play in addressing the great challenges and opportunities of our times.

Under the terms of the MoC, the Institute will be established by both the Academy for Advanced Interdisciplinary Studies at SUSTech and the Department of Management, Technology and Economics (D-MTEC) at ETH Zürich. The Institute shall be devoted to research and developing an innovative dynamic risk management system. The system will develop real-time dynamic monitoring of extreme events in different natural and social systems through simulation and trend analysis.

Accurate forecasting and early warning problems will provide society with the ability to better adapt to new and unique problems, minimizing risk and social instability. The Institute will be led by the Head of the Department of Earth and Space Sciences at SUSTech, Professor Chen Xiaofei, in conjunction with Chair of Entrepreneurial Risks at D-MTEC, Professor Didier Sornette.

ETH Zürich is the world’s top research university, and has been ranked among the top universities in Europe for many years. It is ranked 7th in the world in the Times Higher Education 2019 World University Rankings. There are 21 Nobel Prize Laureates among the alumni and current faculty members, including Albert Einstein.

President Chen Shiyi of Southern University of Science and Technology (SUSTech) was the guest speaker at Imperial College of London, for the Imperial College Lighthill Lecture 2019. President Chen spoke to over 200 faculty members on the topic of “Progress in Multiscale Physics and Modeling of Fluid Turbulence.”

The James Lighthill Lecture is a high profile annual event in the Imperial College of London events calendar. It is given by distinguished individuals in the area of Fluid Mechanics and celebrates the opening of their Centre for Doctoral Training in Fluid Dynamics across Scales (CDT) and the pioneering work in this area of Professor Sir James Lighthill FRS whilst at Imperial College. President Chen Shiyi spoke about SUSTech and the progress of turbulence research in China to the assembled audience.

CDT Director Professor John Christos Vassilicos was the moderator for the lecture. Professor Ilya Karlin of ETH Zurich was invited to give a speech of thanks.

Imperial College of London faculty members and students attended the lecture, along with experts and scholars in the fluid mechanics field.

Southern University of Science and Technology (SUSTech) and HEC Paris have this week signed agreements for the creation of dual-degree programs and entrepreneurial innovation training programs.

The agreements, for the first time, represent the continuing interest of HEC Paris and their near 140-year history as a rigorous institution of higher education. The agreements also reflect the ongoing relationship between SUSTech and HEC Paris, which was originally cemented in June 2018 in the presence of French Prime Minister Édouard Philippe. Following the agreement, the SUSTech delegation was led to Station F, the biggest startup campus in the world and the entrepreneurial center of HEC Paris. It is regarded as the only start-up campus that collects an entire entrepreneurial ecosystem under one roof, and is well supported by industry, university and government.

HEC Paris was founded in 1881 by the Paris Chamber of Commerce and Industry. It is the leading academic institution in Europe and the world, and is a long-established European company. HEC Paris has flagship programs in Masters in Management, Masters of Business Administration and Advanced Management Education. It also offers a Master of Science degree, Ph.D. education and advanced management training. HEC Business School is the founding body of the Global Business Education Alliance (CEMS), accredited by three international authorities (EQUIS, AMBA and AACSB).

Southern University of Science and Technology (SUSTech) and King’s College of London have this week signed an agreement to work towards establishing a joint medical school in Shenzhen, China.

This agreement represents for the first time, an expression of interest in establishing a dual degree offering in medical education between the UK and China and would bring King’s 800-year history and world-renowned reputation in training doctors and medical professionals to the dynamic Greater Bay Area in China.

The new School of Medicine would be part of the SUSTech campus in Shenzhen, China and would help establish the city as the place to go to for high-quality medical education, healthcare and cutting-edge research. President and Principal of King’s College London, Professor Edward Byrne said: “This agreement represents an exciting and unprecedented opportunity for both universities. Our academic depth combined with SUSTech’s innovative approach could pave the way for an extraordinary offering for students.”

SUSTech President Chen Shiyi added that the proposed joint medical school will be the first of its kind in China. He said: “Our goal of integrating science and engineering with medicine will see us producing top medical graduates for Shenzhen, China, the UK and the world.

“There is a long way to go and this agreement represents a good starting point. I hope this will also serve as a bridge between China and the UK to enable further collaboration and exchanges.”