November 20 saw the successful conclusion of the 2018 meeting of the International Advisory Council (IAC) of Southern University of Science and Technology (SUSTech). The IAC members provided valuable suggestions and advice for SUSTech’s development as it strives to become a world-class university, rooted in China. 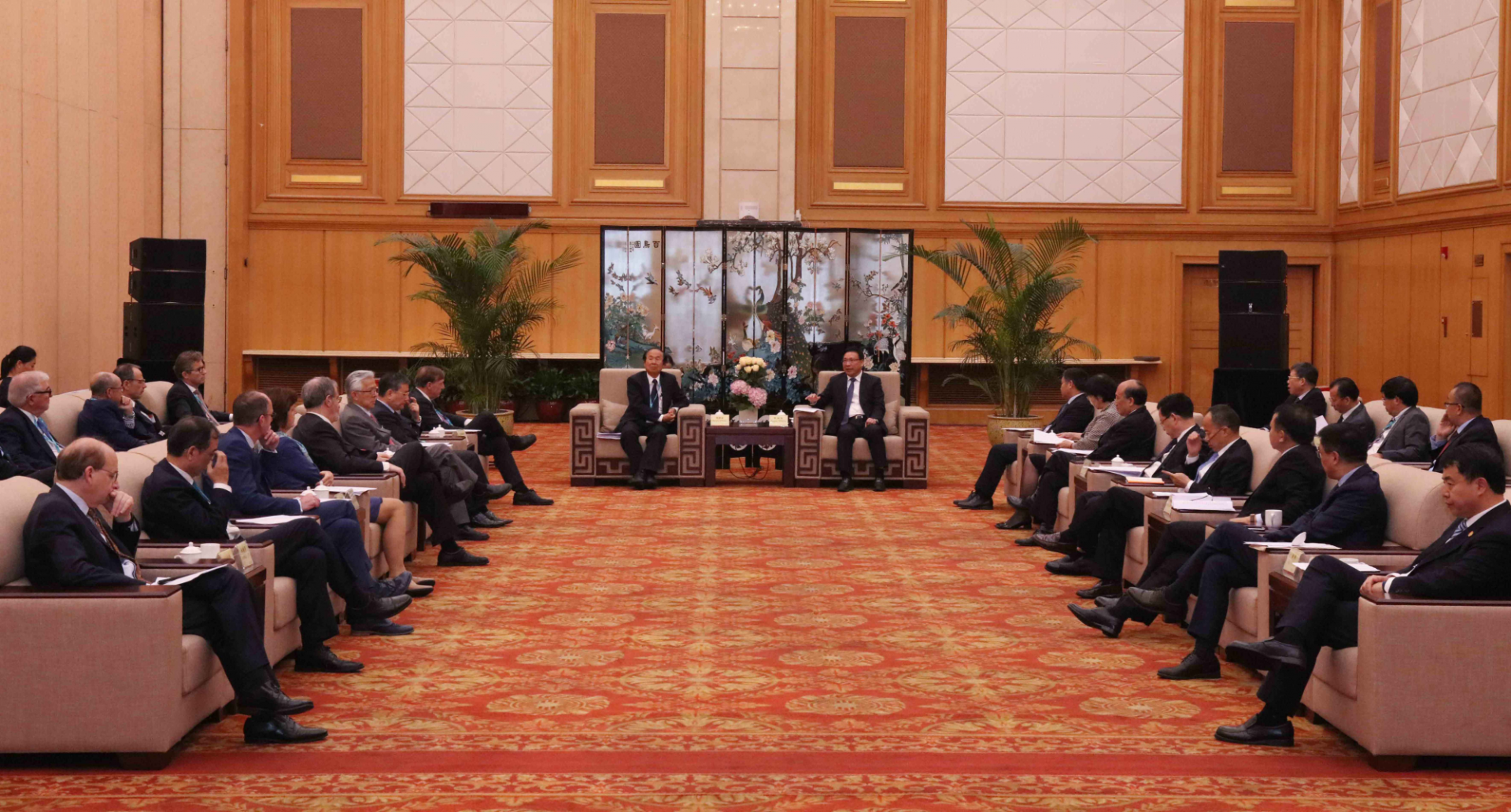 Dr. Henry T. Yang summarized the report as the IAC Chair. He said that SUSTech had accomplished so much in such a short period of time, highlighting the successful approval from the Ministry of Education for being qualified to Ph.D. and Master degree programs, as well as the development of the School of Medicine. 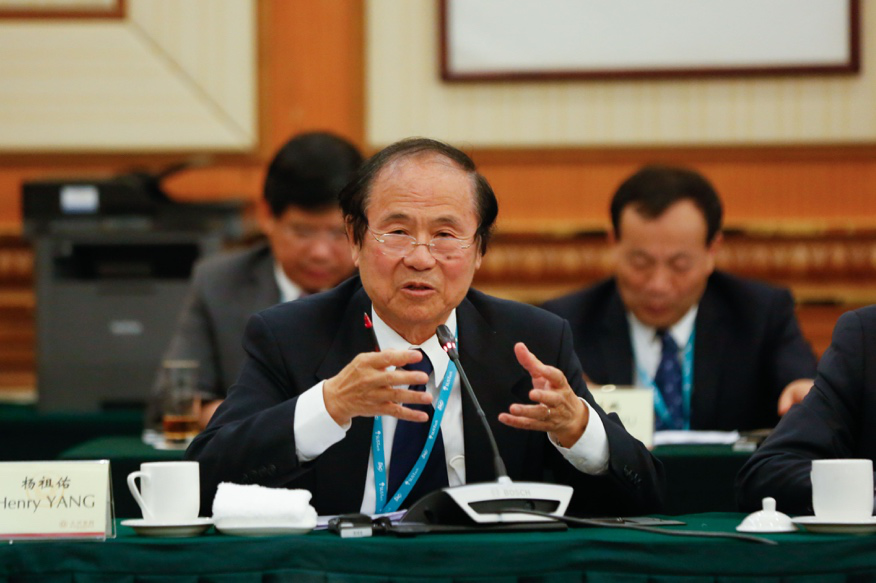 Mayor Rugui Chen thanked the IAC members for their support of and suggestions for SUSTech. He said that Shenzhen needs a talent pipeline and an innovative ecology for its future development. Consequently, collaboration between cities, universities, and industry is needed to develop a growth mindset for talents. 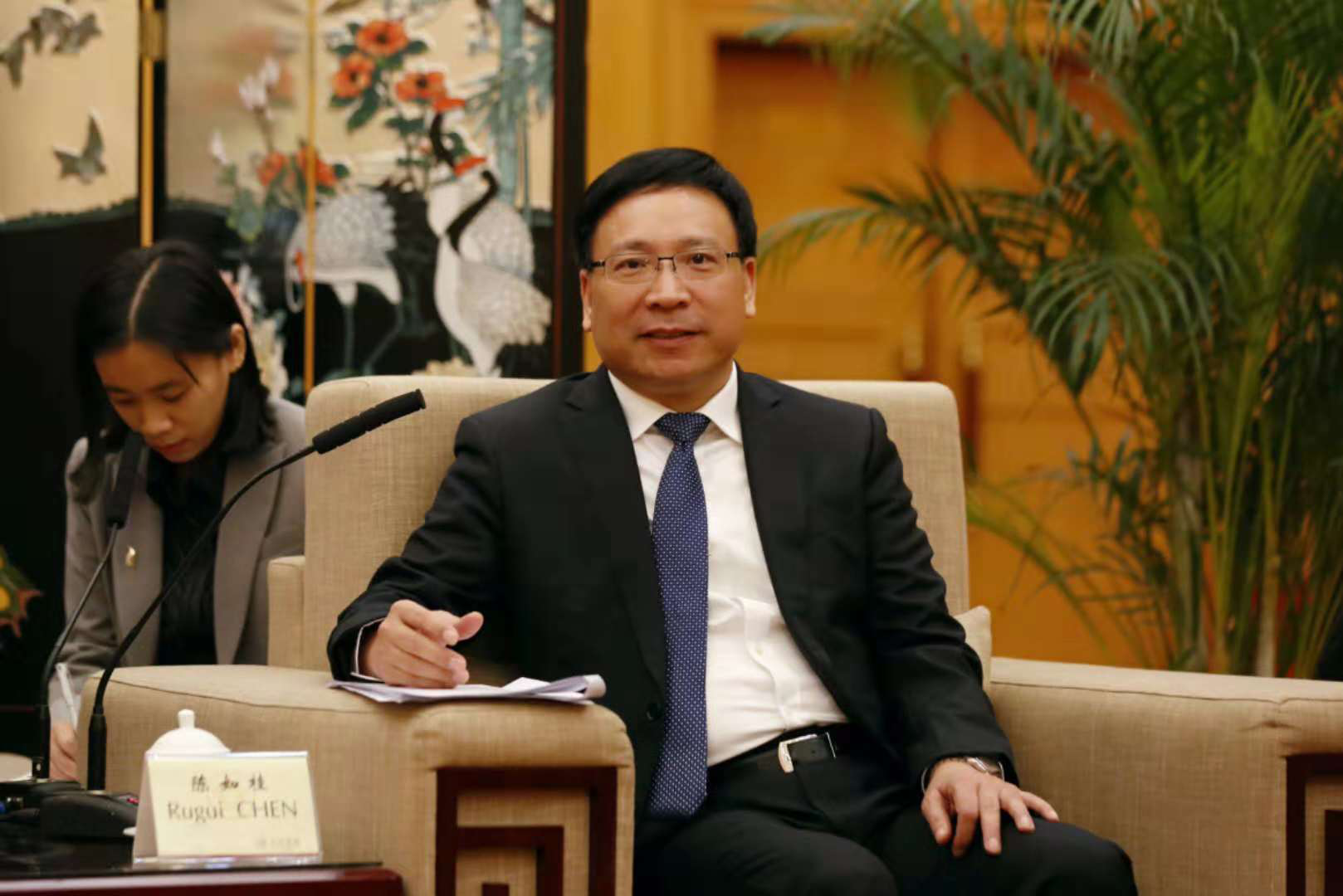 He said that world-renowned universities would partner with Shenzhen in the future to carry out scientific research and develop locally trained talents. He hoped that the academic prestige and influence of members of the IAC could be used to promote higher education in Shenzhen.

Earlier in the day before the presentation to the Mayor, the IAC members held a closed-door meeting to prepare a preliminary report for SUSTech.

The IAC Members spoke highly of SUSTech’s high-speed and high-quality development, affirmed the vibrant leadership, and expressed their appreciation for SUSTech’s new medical school. They hoped that the University can establish a longer-term development goal.

Vice Mayor Lixin Wang extended his gratitude on behalf of the city, as the IAC members have provided many valuable views and feedback of how to make SUSTech a world class university. 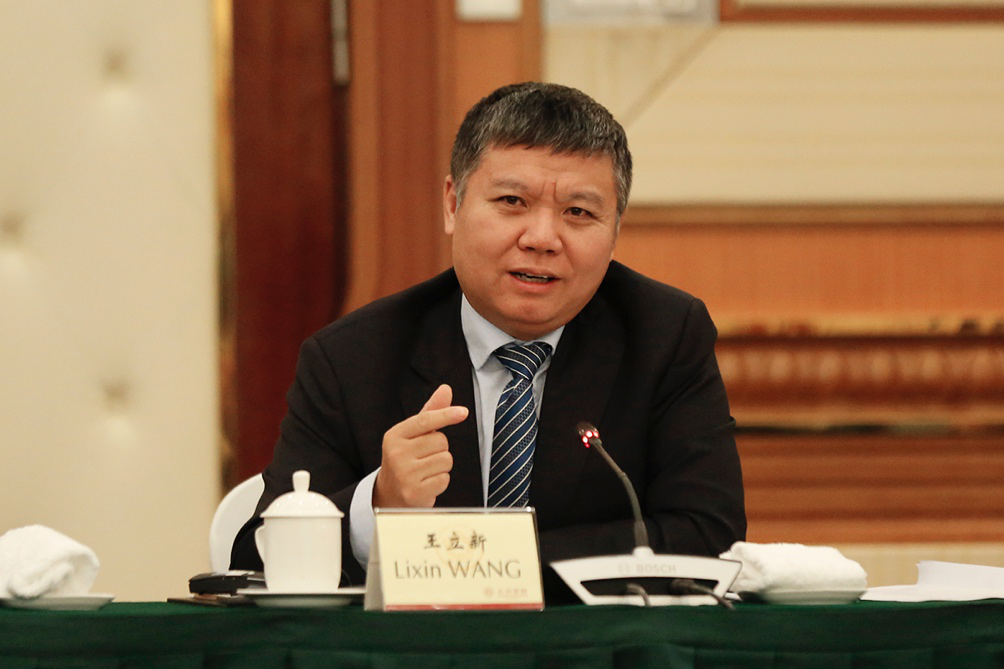 He said that the advice received today would provide reference for the government’s decision making, and hoped the leadership of SUSTech would study the valuable suggestions and further promote the development of the University.

SUSTech President Shiyi Chen once again expressed his sincere gratitude to the IAC members for coming from afar for this event. He also thanked the Shenzhen Municipal Government for providing their guidance and support. President Shiyi Chen said that SUSTech’s sustainable development was important. He emphasized the future construction of the School of Medicine as a major goal of the University in the future.

In the afternoon after the meetings, SUSTech Vice President Chun Lu facilitated the press conference between journalists from numerous media outlets and 10 IAC members. 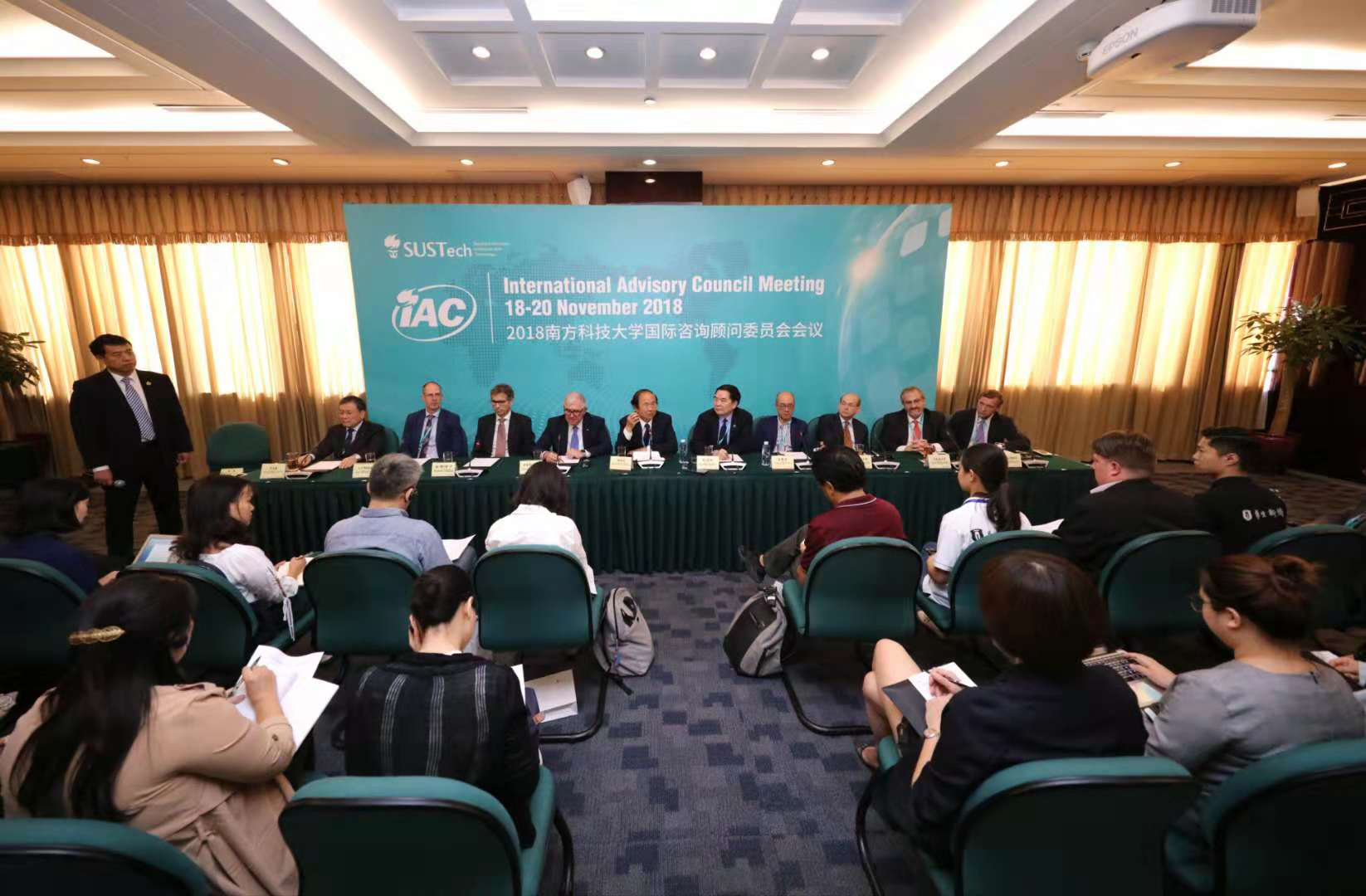 The IAC members shared their impressions on SUSTech and Shenzhen with the media. They said that the building of SUSTech’s School of Medicine will promote the development of interdisciplinary and collaborative research across Shenzhen, while providing a guarantee of the quality of healthcare options for local citizens.

The journalists also asked questions about university rankings, faculty, undergraduate and postgraduate education, and the achievements of the IAC.

After the meeting, the IAC members visited Dajiang Innovations Technology, one of the world’s leading developers and manufacturers in UAV autopilot systems, better known as DJI.

During the two-day IAC meeting, SUSTech signed MoUs and cooperation agreements with the University of Queensland, Korea Advanced Institute of Science and Technology, Rice University, University of Michigan, and ETH Zurich. 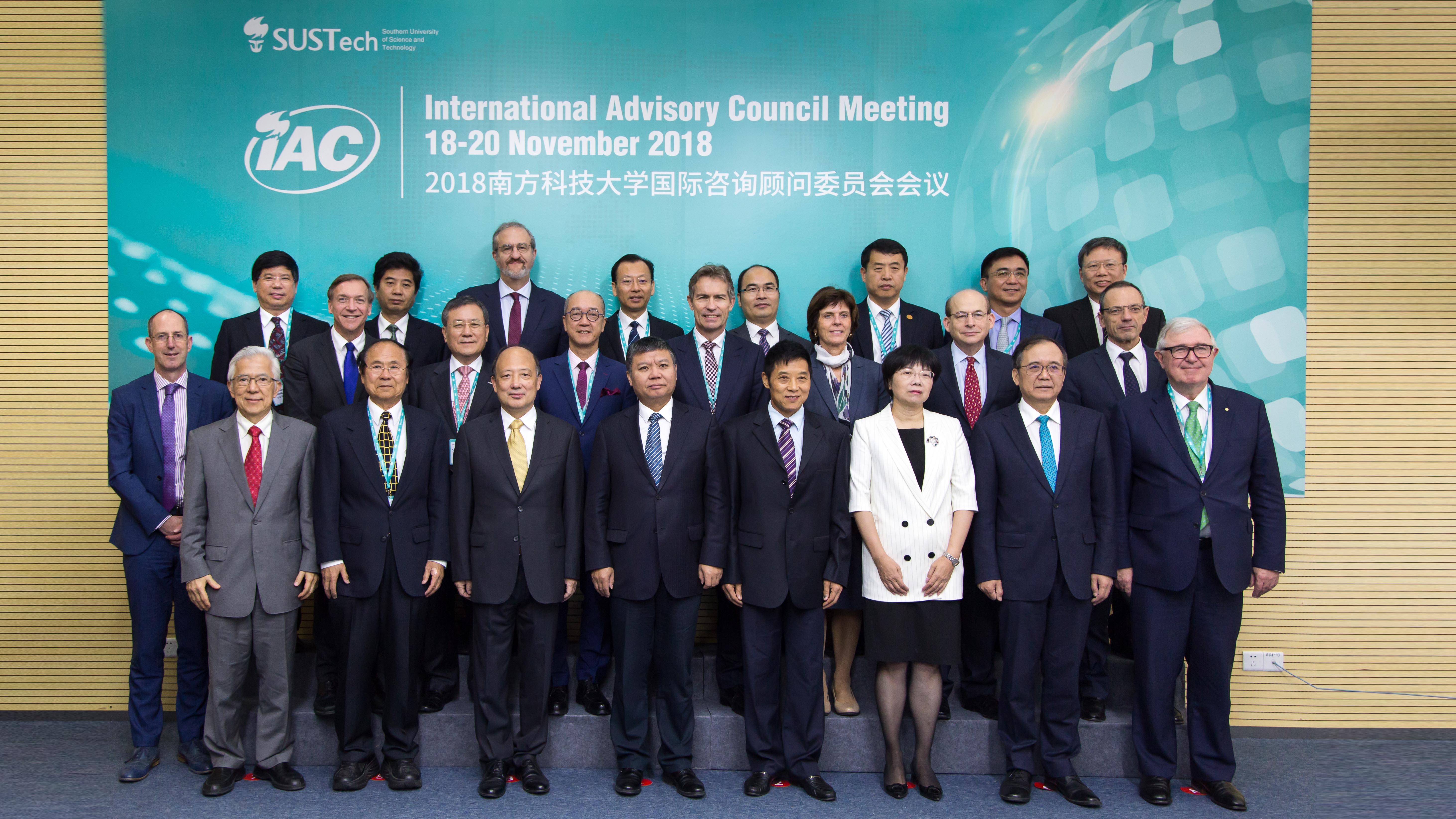 November 19th was the first day of the 2018 International Advisory Council (IAC) meeting of Southern University of Science and Technology (SUSTech). 16 leading international academics of the world’s top universities have joined together to form a think tank for SUSTech’s future development.

Great importance has been attached to the event by the Guangdong Provincial Government and the Shenzhen Municipal Government. Vice Mayor of Shenzhen Lixin Wang and Associate Counsel of Guangdong Provincial Department of Education Zicheng Wang attended the opening ceremony. Later that evening, Vice Mayor of Shenzhen Xuefeng Ai met with members of the International Advisory Council (IAC).

They have all made great achievements in the international academic and educational circles, have rich experience in running world-class universities, and have high prestige and influence in the global higher education sector. Henry T. Yang serves as Chair of International Advisory Council.

When meeting members of the International Advisory Council (IAC) of SUSTech, Lixin Wang introduced Shenzhen’s rapid development and the emphasis the city has placed on higher education. He hoped that all members would provide guidance for SUSTech’s development and internationalization, through their rich experience in running universities and strategic vision.

The Guangdong Provincial Government attaches importance to building more high-level universities in the region. It also supports the further development of SUSTech, said Zicheng Wang. He believed that the leading international academics present today would help SUSTech with a global vision, which will power Guangdong's higher education in future.

During the meeting, SUSTech’s President Shiyi Chen reported on the “State of the University.” The report mainly covers four aspects. It responded to the 2017 report, covered the progress made this year, and showed the new initiatives and new opportunities available. He also spoke about the challenges faced by SUSTech. He reviewed SUSTech’s progress in areas like student enrollment, faculty, academic structure, and research. Shiyi Chen also highlighted the achievements of 2017, including obtaining the qualification to confer doctoral and master’s degrees in the shortest time, campus construction and the preparation of the School of Medicine.

He also introduced the new initiatives of building three academic institutes, including the Creative Design School, the SUSTech-HKUST Joint School of Microelectronics, and School of System Design and Intelligent Manufacturing. He pointed out that there are still some shortcomings when it comes to competing for talent pipeline and resources, but SUSTech is confident when it comes to seizing new opportunities.

Later that day, the IAC members visited SUSTech Cryo-Electron Microscopy Research Center. Following that, they went to the students commons to learn about the lives of SUSTech students, where they had in-depth exchanges with the students. 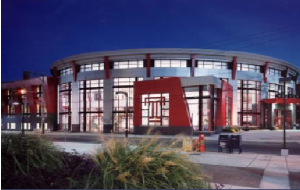 If you want to improve your English in an immersion environment and only have a short time to devote to language study, this super-intensive program is a good fit for you. You will improve your English reading, writing, listening and speaking in stimulating and challenging courses.

Enroll in this exciting, 3 or 4-week program to improve your English and learn about the American culture.

Spend the mornings building your reading, writing, listening and speaking skills. In the afternoons, take trips to explore historic and cultural sites in Philadelphia and its surrounding region.

Enroll in this exciting, 3 or 4-week program to improve your English and learn about the American culture.

Spend the mornings building your reading, writing, listening and speaking skills. In the afternoons, take trips to explore historic and cultural sites in Philadelphia and its surrounding region. 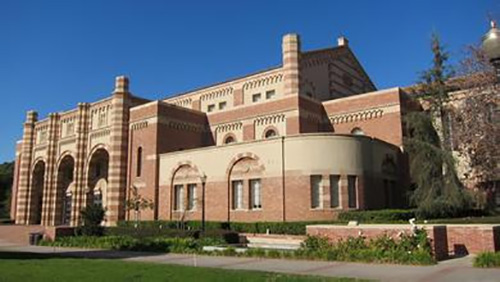 University of Carlifornia at Los Angeles is a public research university located in LA, California. It is one of the best comprehensive universities in America and have a good reputation for bussiness finance, high technology industry and movie art. As the most applied university in America, UCLA has always been the dream school for senior students all over America. Established in 1919, UCLA has become the second best among the public universites, right after UC Berkeley. UCLA has been on the Times’ list of top 50 universities in the world for years. UCLA is 24th in 2017’s USNews American university ranking list.  16 professors and alumni of UCLA have won the Noble Prize. UCLA is also well-known for the excellent performance of its students in the Olympic Game. Students and alumni of UCLA have attend every Olympic Game since 1928, and have won 233 medals including 123 gold medals.

CSST program have a duration of ten weeks. During the course, students will participate in UCLA labs to receive instructions from senior professors and training for research ability. After finishing the program , students will receive 12 UCLA course credits. This program mainly oriented to outstanding junior students that have strong interest in cross-disciplinary research and intent to apply for PhD degree in UCLA. On November 1, 2018, The Duke of York visited Southern University of Science and Technology (SUSTech). HRH visited the 3D campus construction sand table, the Technology Transfer Innovation and Entrepreneurship Exhibition, and the Cryo-Electron Microscopy Center. He also met students flying the “Heron” UAVs, who are preparing to display the drones at the 12th China International Aviation and Aerospace Exhibition in Zhuhai later this month.

President Chen Shiyi warmly welcomed HRH on his visit to SUSTech. He briefed The Duke on the development of " Striving for a world-class university, rooted in China" and expounded on the aspects of the development strategy, talent pipeline, international cooperation, Industry-University cooperation and construction of the School of Medicine.

HRH expressed his appreciation for the cooperation and exchanges between the University and British universities and heard of the planned cooperation between SUSTech and King's College of London in medical education and scientific research.

This collaboration between the two universities will use the local advantages of Shenzhen to cultivate future medical industry leaders through innovative medical education courses and teaching methods and become a model for Sino-UK higher education cooperation.

As a new university, SUSTech will make outstanding contributions to the development of Shenzhen's high-tech industry, as well as to regional prosperity and global technology development.

British Ambassador to China Dame Barbara Woodward, Director Lu Jintao of the European Department of the Chinese People's Institute of Foreign Affairs, Deputy Director Sun Huaizhong of the Shenzhen Foreign Affairs Office and Consul General Karen Maddocks of the British Consulate General in Guangzhou, accompanied The Duke on his visit.

The Duke of York is currently on an official visit to China from 31st October to 6th November 2018 at the request of Her Majesty’s Government. During this visit, The Duke will attend the inaugural China International Import Expo (CIIE) on November 5th, 2018.

HRH will lead the UK delegation attending CIIE, accompanied by International Trade Secretary Dr. Liam Fox MP and Minister for Trade and Export Promotion Baroness Fairhead. The UK has been named as a "Country of Honour" at China's biggest international trade show.

Immediately before attending CIIE, HRH is undertaking a series of official engagements at the request of the Foreign and Commonwealth Office in Shenzhen and Ningbo.